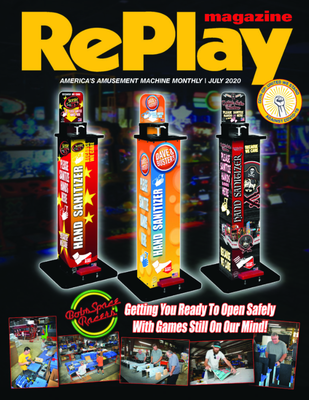 With more than 50 years in the amusement industry, Bob’s Space Racers certainly has plenty of experience adapting to changes in the marketplace. Coming out of the coronavirus shutdown, that is reflected in a decision to build their new Hands-Free Sanitizer Station, which is exactly what it sounds like. The all-mechanical, foot pedal-operated sanitizing station was first conceived by CEO Glenda Cook during the shutdown, and BSR went into full production in early May as locations were slowly beginning to open.

There are three models: a stainless-steel base model, a standard version with standard graphics, and a custom model meant for businesses that want their logo, colors, and more on the station.

Bob’s Space Racers is not only helping the FEC community step up their facility cleanliness but a whole host of different customers as well. “It’s amazing where everyone is coming from to buy these units,” said company president Jack Cook, noting they’ve sold to schools, cities, hotels, and more, not just Dave & Buster’s and other industry folks. But company sales leader Ron Malinowski was quick to point out that it’s great for arcades and route stops, and especially anywhere kids are. “In arcades, there’s no mess and because you can adjust the output of the solution. You don’t have to worry about kids wasting all the product,” he said.

“What’s cool about it, when you sanitize your hands with the station, you’re not compromising cleanliness by turning off a nozzle or faucet handle,” Malinowski added. “You’re not touching anything else. You pump out a squirt, clean your hands and off you go.”

The small-footprint, 16”x16” sanitizing station holds a gallon of hand sanitizer solution with the adjustable output component. That coupled with the removable drip tray makes it easy to clean.

BSR sells the actual gel sanitizer solution as well, which they’re only selling to customers who buy the units so they don’t run out. Reorders are available as well. However, they say customers can also use any 1-gallon container of gel, liquid, or any other pumpable hand sanitizer in the unit. Not only does BSR sell the stations to companies in the amusement industry and beyond, but they also use them in-house. Here Andrea Howell of the accounts receivable department uses a Hand Sanitizing Station before clocking in.

Cook noted that they’ve been selling the product mainly to smaller companies that are making the extra effort to ensure cleanliness in their facilities.

One thing is for sure – a lot of people are buying right now. “We’re shipping as fast as we can get them built,” Cook explained. “It’s a crazy market right now.” The base and standard models are shipping out in one to two days and custom units take two to four days after artwork is approved.

BSR is also limiting the number of shipped orders to any one buyer. “If someone wants 1,000 units, we’re not giving them all that right off the bat,” he said. “We don’t want to shut out our other customers. That’s what Bob’s Space Racers has been built on.”

Of course, the company was also built on games. But that part of the business – and just about every part of everybody’s business – got put on hold for a while in March.

“I probably have the most customers out of any companies in the industry. We sell to distributors, end-users, amusement parks – everybody,” Cook said. “And I don’t think I had a customer anywhere that was open.”

Games they were building prior to the COVID-19 shutdown are stacked up in the warehouse. They were forced to shut down fully for about four weeks and we're back producing in May, working to finish up previous orders and start on the Hands-Free Sanitizer Station.

While the company has a new product that benefits all industries right now, their focus is still on games – including a new line of attendant-free games for FECs and amusement parks coming in 2021.

“We’re constantly in talks with customers about games,” Cook said. Since they do a lot of work with new-build facilities, they’re continuing to supply for locations that plan on opening this year, such as a big amusement park in China and a mall in the U.S.

“We still have a lot of stuff in the fire, but I would say it’s definitely slowed down,” he said. “But, the more places that get opened without problems, hopefully, the more others will follow quickly.”
Sales top Ron Malinowski added, “It’s much more than just sales. You’re not in this business for 50-plus years, without caring, passion, and an ongoing commitment to doing what is right. That’s our mantra: doing what’s right, taking care of our community, and, at the same time, developing ‘Games the World Plays.’ ”

Cook is fairly optimistic that the industry can get rolling at a decent speed, and is hoping for operations to get summer business going.

“Our operators are the best in the business as far as getting through adversity,” he said. From bad weather at amusement parks to slow months at FECs, he noted that the good businesses always manage to survive. “Our industry is very, very good at reacting to downturns and upturns. We can adapt quickly.”

Malinowski echoed those sentiments. “I’ve been in this great industry over 40 years and I’ve witnessed many ups and downs from the demise of the shopping mall to the Gulf Wars, from 9/11 to the mortgage meltdown, and today, the coronavirus. Through the challenges, we’ve all learned to dig in, suck it up, and make it better.

“During our government-mandated shutdown, we’ve had the opportunity to take stock of our business and personal perspectives. We are challenged indeed, but we all can do better and we will,” he said. “We are ‘Coin-Op Strong!’”